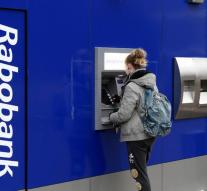 amsterdam - For fear of explosion creaks, Rabobank rents through security forces throughout the Netherlands to guard the ATMs. The bank says security is needed to stop the growing number of explosives.

The guards are reported to be at ATMs at apartment buildings, where the criminals can cause major damage to homes by the use of explosives. 'We are looking for definitive solutions, but as long as they are not, we opt for physical security or extra surveillance,' says Rabo Margo van Wijgerden to the AD.

The deployment of the security officers is expensive according to the bank. 'But safety is paramount. '