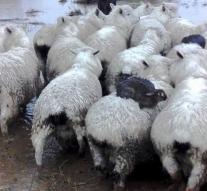 wellington (new zealand) - It was an adventurous, but gentle ride for three wild rabbits in New Zealand. The beasts struck in flight for rising water due to heavy rainfall. Because the three were afraid to get wet paws, they jumped back on the back of a few sheep and surfused their safety.

New Zealand farmer Ferg Horne (64) witnessed the special scene. He tried to safeguard his neighbor's sheep when he noticed some 'spotted' specimens. Horne got confused because, as he wondered, his neighbor had only white-blooded sheep?

When he came closer he saw the rabbits: two on one sheep and the third on another sheep. The rabbits clung to their wool with their feet. Because he thought nobody would believe the remarkable story, Horne decided to take a picture with his phone.

The sheep stood with their feet in the water and so Horne decided to bring the group to a high-lying area. 'But the sheep did not think so and put it on a run. The rabbits had a lot of trouble staying. '

Because rabbits in New Zealand are a plague for farmers, they are often shot off. Horne also usually kills the animals. 'But now they showed so much willpower that they deserve to live,' said the farmer.