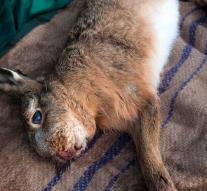 - A man who calls himself 'Herman de Viller' is going to want a rabbit in a live stream on Facebook. That would happen last Saturday, but then his location was discovered. Unknowns threw eggs against the windows and spits 'mess' in the locks, can be read on the @Hermandeviller page.

'Herman' has found a new location and still wants a rabbit. It is not known when that happens.

Behind the Facebook page would be a butcher from the village of Wekerom. Bosses can let their dead rabbit so that they keep the fur as a souvenir. And who wants to get the meat to eat.

Via Facebook, the account says 'Van Flappie tot Bontje': 'Despite all the commotion of yesterday, media attention has led to positivity. Location found for the live stream! We also received a lot of supportive evidence and this gives us energy to continue. Our mobile phone will be ready for a while, the site is almost ready! '