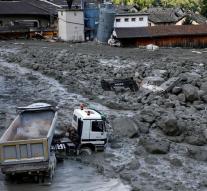 bondo - Rescuers have stopped searching for eight people missing after a landslide Wednesday in the Swiss Alps. After two new landslides, they first want to see if it's safe to search further, as there is a risk of more rocks coming down. According to the police, the chances of the eight are still getting smaller.

The missing are four Germans, two Swiss and two Austrians. They took a walk in a remote part of the canton of Graubünden. Large parts of Bondo village are covered with stones, mud and debris.