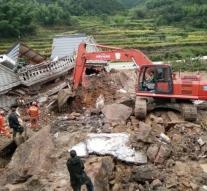 peking - Rescuers have fought fifteen bodies after a large earthquake in the central province of Sichuan, China, has surrendered 120 people under the rubble. In the night of Saturday on Sunday, the search has continued, report Chinese state media. Even though the risk of survivors is getting smaller.

The Secretary-General of the United Nations António Guterres has expressed his sympathy. He says that the UN is ready to assist the Chinese authorities in any way if needed.

SEE ALSO: Over a hundred people in ruins in China

State newspaper People's Daily reports that debris on a mountain began to shift due to heavy rainfall. Then the earthquake began to burst dozens of houses in the remote town of Xinmo on Saturday morning. The authorities struck a great alarm and sent more than a thousand emergency workers and rescuers to the area.

According to the local police, a lack of vegetation has been the cause of the landslide.

Image shows how rescue workers with bulldozers are looking for survivors. In spite of the massive deployment of aid workers, only six bodies were found seventeen hours after the landslide. Three members of the family were also living alive under the rubble, including a baby.

China has been harassed for weeks by heavy rainfall. The floods cause floods and landslides also occurred in various other places. Certainly four people have come to life. Chinese media report that a total of 390,000 people have been affected by natural violence.