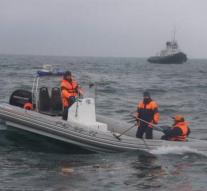 sochi - The search for wreckage and victims of the plane crash in the Black Sea is in the night from Sunday to Monday by. That might be a spokesman for the Defense Ministry Sunday knowing.

More than three thousand people are involved in the operation, non-stop search the area with the help of helicopters, aircraft and ships. The probability that there are still survivors of the crash of Sunday is excluded.

The BBC reports that have since been found eleven bodies. Airplane parts are at about one and a half kilometers from the coast, at a depth of between fifty and seventy meters, the ministry said.

The Russian military plane with 92 people aboard, was en route to Syria, when the plane after takeoff crashed into the sea. President Vladimir Putin has declared Monday national day of mourning.