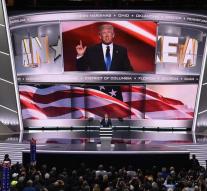 london - The rock band Queen has not the first time Donald Trump asked now agree to stop playing their music at its meetings. Republican presidential candidate also left Tuesday at the Republican Convention in Cleveland again the famous We Are The Champions by Quicken Loans Arena blare.

An unauthorized use, against our wishes, as the band tweeted Tuesday in a comment. Guitarist Brian May expressed recently been pretty annoyed that Trump used the music of Queen and he threatened that occasion with legal action. Whether that will actually happen, the notice shall not.