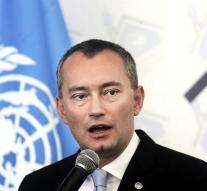 - Israel must stop building settlements deny Palestinian development and land would have to be allocated exclusively for Israeli use the Palestinians for a future state. These recommendations are in a draft report that so-called Middle East Quartet drafted.

The Quartet, comprising the United States, Russia, the United Nations and the European Union, the stalled peace process, trying to get back on track. UN envoy for the Middle East Nickolay Mladenov briefed the Security Council Thursday on the report, which is released Friday by the members of the quartet after approval.

The report says that affect the viability of the two-state solution policy pursued by Israel,, ''. There are questions about Israel's intentions in the long term, in the light of statements by some Israeli ministers that there should never be a Palestinian state.


Diplomatic sources familiar with the report considerable political weight to, because it is endorsed by the US. Relations between the government of Israeli Prime Minister Benjamin Netanyahu and the US Obama administration, however, are far from cordial.

Mladenov says that,, reasonable steps '' Israel and the Palestinians could help towards peace. Continued violence, terrorism and incitement; expansion of Israeli settlements and the lack of authority of the Palestinian Authority in Gaza,, undermine the hope of peace seriously. '