Home / World / Quarter of Vanuatu parliament must in jail 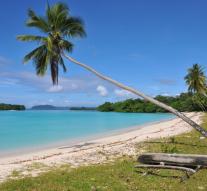 - About a quarter of the Members of Parliament of the Republic of Vanuatu in the Pacific disappear in one stroke behind bars for corruption. Fourteen of the 52 MPs let themselves bribe. Deputy Prime Minister Moana Carcasses had converted a total of 275 000 euro bribe down. It is still unclear why he made those payments.

The BBC reported Thursday that the action of justice likely will soon lead to elections. The current parliament and cabinet included only since June. In Vanuatu the ministers a member of parliament. As president Baldwin Lonsdale saw robbed after the court judgment of his ministers of Foreign Affairs and Finance.

Carcasses was given four years in prison, twelve others three years. Bribed a politician pleaded guilty. He was suspended for 20 months as a member of parliament.