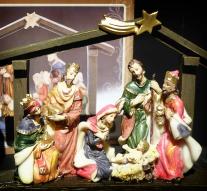 The decision by the local mayor, according to Het Nieuwsblad caused great anger at Minister Theo Francken. He said it was 'time to defend our values.' Mayor Hans Eyssen says it now complaints were not believers. The town hall is according to him a neutral place and a nativity scene a religious symbol.

Opposition party N-VA has inhabitants of Holsbeek called to take massive nativity scenes at the next council meeting. 'Christmas is part of our folklore and tradition,' said the local department in a statement.

The Flemish Minister for Internal Administration will also review the escalating issue. The Belgian Association of Municipalities (VVSG) tells The News that if the nativity scene removed from the City Hall, also must disappear manger at market squares. Sinterklaas also the entry would well be banned.