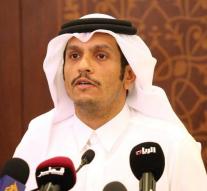 doha - Qatar is open to dialogue to address the crisis with its neighbors in the Gulf region. Foreign Minister Abdulrahman Al-Thani said Tuesday to CNN news channel. 'We want to sit and talk to the table.'

Al-Thani said Qatar believes in diplomacy and wants to promote peace in the Middle East. The country also combats terrorism. 'We are not a superpower here. We do not think things are to be resolved with confrontation. '

The Qatar minister received support from the US. The Pentagon reiterates Qatar on Tuesday for housing American armed forces and the 'firm involvement in security in the region. 'That was a reassuring message, even though President Trump cried, via Twitter, the decision of a number of Arab countries to terminate relations with Qatar.