Home / World / Python flies in shoe from Australia to Glasgow 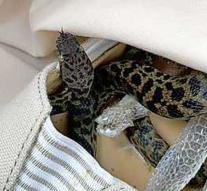 glasgow - A Scottish woman has- without knowing it- made a plane flight with a python in one of her shoes, which was packed in her suitcase. The animal even got boring during the flight.

Moira Boxall flew Thursday from Queensland (Australia) to Glasgow (Scotland). When she found the python curled up in the shoe after that flight, she was shocked. According to ABC, the woman initially thought that it was a toy snake that had been put into the shoe by her grandson as a joke. This appeared to not be the case.