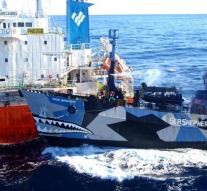 - Japanese whalers on Tuesday before the US courts in their own words gained an important victory over their arch enemies of Sea Shepherd.

However, animal rights activists have already withdrawn from the settlement enforced by the court. They moved their anti-whaling campaign to Australia and say to continue their struggle.

Mother organization Sea Shepherd Conservation Society Tuesday promised the Japanese whalers no longer,, physically attack 'and not to get in their way. The settlement was to put an end to the lawsuit between the organization and the Japanese research institute ICR and the company that catches whales for ICR. This whaling invariably causes each year- sometimes very hard- confrontations at sea between the activists and the whalers.


The court in San Francisco ruled interim Sea Shepherd was guilty of piracy, which is the parent organization of its anti-whaling campaign shifted to the independent subsidiary Sea Shepherd Australia. The director had already managed to attract no notice of the settlement. He would have the Australian law on his side.