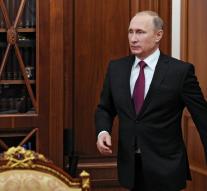 quote; Anything that threatens us or our country must be destroyed immediately ", said the Russian president at a meeting at the Ministry of Defence. Putin said that the Russian Air Force major damage caused to the infrastructure of IS.

Defense Minister Sergei Shoigu added that the impact of IS is growing in Syria. Militants have him under control about 70 percent of the country.

The Russian minister not further know that there are about 60 000 IS- fighters are in Iraq and Syria, and that the violence threatens to extend into the former territory of the Soviet Union in Central Asia.