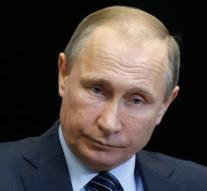 moscow - Russian President Vladimir Putin wants to cooperate with the United States keep an eye on future aid convoys in Syria. That said German Vice Chancellor Sigmar Gabriel after a meeting with the Russian leader in Moscow.

The US and Russia recently flew each other's throats after the bombardment of a convoy in Aleppo. The US being an accusing finger at Moscow, while the Kremlin said that a US drone was in the area during the attack.

According to Gabriel Putin Wednesday denied any involvement in the attack. The president would even be prepared to deploy Russian troops to monitor aid convoys. Putin wants, according to the vice chancellor, however, that the Americans do the same.

' This is one of the major conflicts. Americans are not prepared to do so. Not yet, anyway, said the German, who argued that Putin let it be known to be very interested in restoring the ceasefire.