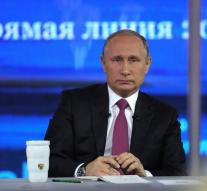 moscow - Vladimir Putin started a cautious charity offensive on Thursday in the direction of the United States. The Russian president said during his traditional consultation with the civilian population that he would like to improve and normalize tense relations with the Americans. 'We do not see the US as an enemy', Putin assured the questionnaires. Without constructive cooperation with Washington, a solution to the crisis in Syria is impossible.

Putin criticized the growing hostility against Russia in the broadcast. According to him, this is due to the political power struggle in the US.

The understanding between Washington and Moscow is at a low point. In addition to the conflicts in Ukraine and Syria, the allegations of Russian interference in the US presidential election also stem. Putin meets the US President Donald Trump in July during the G20 summit in Hamburg.