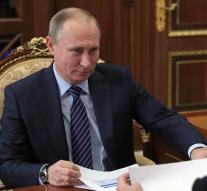 moscow - Russian President Vladimir Putin wants the ties between his country and Japan 'fully normalize.' Prior to his visit to Japan, where he arrives Thursday, Putin said the absence of a formal peace treaty between Moscow and Tokyo, not this time.

The then Soviet Union attacked Japanese territories in Asia in 1945, in the aftermath of World War II. It took until 1956 until the countries formally ended their state of war. A genuine peace treaty did not happen.

Russia and Japan have an unresolved dispute over four islands belonging to the Kuril. Both countries claim control over the islands.