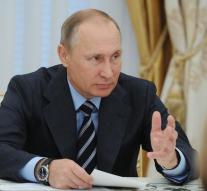 moscow - Russian President Vladimir Putin said Friday his deputy chief of staff Vyacheslav Volodin put forward as president of the Sunday elected parliament. Putin said in an interview with members of the new Russian parliament, the Duma, although it is not its task is to choose a president, but he finds Volodin as parliament chief a good idea and Prime Minister Dmitry Medvedev believes that according to Putin.

The first session of the newly elected Duma stands for October 5 on the program.

The elections have become a victory for Putin's United Russia (VR), but the low turnout mars victory VR. Which has more than 340 seats won. There is practically no opposition in parliament. The other three major parties who grabbed seats, the Communist Party, an ultra-nationalist party and a social democratic party, do not count as serious opponents of the Kremlin.