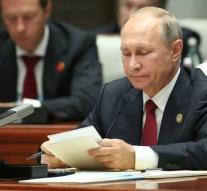 moscow - Russia is preparing a UN resolution on the deployment of UN blue helmets in eastern Ukraine. That was announced by Russian President Vladimir Putin on Tuesday. In the area, pro-Russian separatists fight against the army of Ukraine.

The resolution will be put to the UN Security Council. Moscow wants to use the blue helmets to protect the unarmed observers of the Organization for Security and Cooperation in Europe (OSCE) that are active in the front.

Ukraine wants a completely different UN mission and will propose it to submit to the General Assembly of the United Nations. Kiev wants an international peacekeeping force in the area of ​​separatists.

Putin also warned the US not to supply defensive weapons to Ukraine. That would only exacerbate the conflict in the area and possibly move the separatists to become more active. Putin responded to comments from the US Secretary of Defense Jim Mattis. Last month, when visiting Kiev, he knew whether he had to send weapons to Ukraine so that the country could better defend itself.