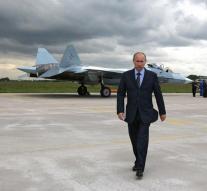 - Russian leaders, including President Vladimir Putin, deviant behavior course. Their means of locomotion seems closest to that of gunfighters in the American Wild West. Almost always they have the right arm tightly along the body, ready to quickly pull a pistol from the holster.

The gait was discovered by neurologist Bas Bloem of the Radboud University Nijmegen Medical Centre in Nijmegen, together with international colleagues. Their findings were published Tuesday in the special Christmas edition of the British Medical Journal.The neurologists came up with the idea for their research after viewingvideos on YouTube of President Putin. Russian President moves his right arm while walking less good with it. That could indicate incipient symptoms of Parkinson's disease, but further research showed that other Russian leaders as walking.
NEW