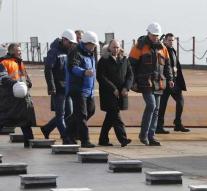 sebastopol - Russian President Vladimir Putin visited the Crimea on Wednesday, the Ukrainian peninsula that was annexed by Russia in March 2014. Putin visited, among other things, the bridge that is being built between the Crimea and the Russian mainland. The president said he hopes the bridge will be ready next summer, rather than planned.

Putin probably also visits a manifesto in the city of Sevastopol to commemorate the annexation. Sebastopol has been an important port of call for the Russian navy for years. Ukrainian President Petro Poroshenko called Putin's journey a 'dangerous provocation'.

Russia chooses a new president next Sunday. Putin is almost certainly re-elected. Then he starts his fourth term as president. He reigned from 2000 to 2008, then was prime minister for four years and became president again in 2012. In re-election he can stay on until 2024.