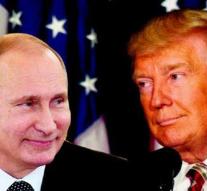 xiamen - Russian President Vladimir Putin finds it naive to ask him if he is disappointed with the presidency of Donald Trump. 'He is not my bride,' Putin told reporters on an economic summit in Xiamen on Tuesday.

'He is not my bride and I'm not his groom,' said the Russian president. 'The question sounds very naive. 'Putin is in China for a meeting of the BRICS group, consisting of Russia, Brazil, India, China and South Africa.

The relationship between Russia and the United States is on the verge. Both countries have closed one another's embassies and there are rumors that the Kremlin has played a role in the US presidential elections of 2016.

Putin told a press conference that the forced closures of some Russian embassies in the United States constitute a 'clear violation of property rights'. The president allows officials to investigate whether it is possible to challenge these decisions with the US judge.

Putin also said he could let more American diplomats turn off but that is not yet planned. 'Let's wait for the progress of the situation. '

Furthermore, Putin was confident that Russia and the United States could solve their mutual problems. 'I believe we can find solutions. '