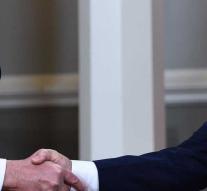 moscow - Russian President Vladimir Putin wants to strengthen the dialogue with the US next year. Russia is open to extensive talks, stressed the Kremlin leader in his...

Relations between Moscow and Washington have been bad for years. In addition to the conflicts in Ukraine and Syria, the mood has mainly been ruined by accusations that Russia would have intervened in the US election campaign. The 30-year treaty between Russia and the United States also threatens to be terminated on the ban on nuclear medium-long weapons.