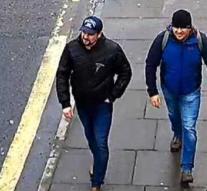 vladivostok - Russia has identified the two men suspected by the British authorities of the attack on Sergey Skripal and his daughter. According to President Vladimir Putin, it is about ordinary citizens. He expressed the hope that they will tell their own story to the world.

Putin's reading is at odds with that of the British government. He thinks that the men were part of the GROe, the Russian military intelligence service. They would have tried to kill the Russian former spy and his daughter in England with the nerve gas Novitsjok.