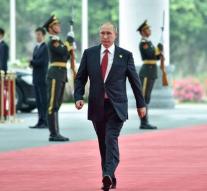 xiamen - Russian President Vladimir Putin sees nothing in new sanctions against North Korea following the latest test, possibly with a hydrogen bomb. Strict sanctions will not change the conduct of leadership in the country, Putin said in Chinese Xiamen at the summit of major emerging economies, the Brics.

New sanctions, according to the Russian leader, can lead to 'human suffering' and, as such, have been exhausted as a way to influence Pyongyang. Putin warned of a 'global catastrophe' when military hysteria around the country is getting even bigger.

The United States declared Monday in the UN Security Council that the tactics of increasing sanctions against North Korea have not worked since the fifteenth-member council since 2006. It is time for the 'strongest possible measures', 'said UN ambassador Nikki Haley.