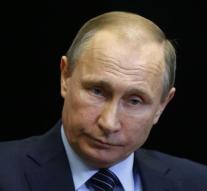 savonlinna - Russian President Vladimir Putin said Thursday that Russia is forced to take retaliatory measures when Washington continues with what he called 'illegal new sanctions' against Moscow. He called American behavior towards his country 'clumsy and unreasonable.'

Putin, visiting Finland, commented on the vote in the House of Representatives Tuesday to impose new sanctions on Moscow because of the alleged Russian interference in the US presidential elections. The sanctions still require approval from the Senate.

The Russian president has repeatedly opposed US accusations of interference in the presidential elections. He said that Moscow will only decide on reprisals if the final text of the proposed sanction law is known.