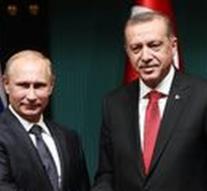 moscow - Russian President Vladimir Putin refuses contact with the Turkish president Tayyip Erdogan as long as it does not want to apologize for the shooting down of a Russian fighter. That said Kremlin spokesman Yuri Ushakov Friday.

quote; We see Turkey's unwillingness to offer just apologize for the incident with the plane ", Ushakov said on the question of reporters why Putin did not want to talk with Erdogan. The Turkish president had asked for a meeting with his Russian counterpart on the sidelines of the climate conference in Paris, which begins Monday.

The two heads of state are diametrically opposed because Turkey Tuesday a Russian fighter shot down near the border with Syria.