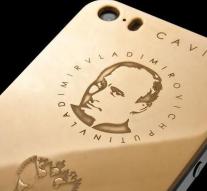 - The Russian jewelry maker Caviar has released a customized iPhone 6s with the head of Russian President Vladimir Putin on the back. The pimped iPhone 6s is the successor to the former 'Putin Phone' which was based on the iPhone 5s.

According to The Next Web hangs from the tribute to the controversial Russian president have a price tag. To get the Putin held phone you must have around 3,000 euros. Incidentally, you do not just get an iPhone that is equipped with a reinforced back in the gold head of Putin, you also get a high gloss storage box in wood with the arms of Russia in gold on the cover.

If you are interested, then you should not wait too long. There are only 63 Putin Phones produced.