Home / World / Putin: not to revise relations with Saudi Arabia 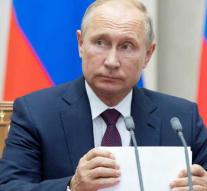 sotsji - Russian President Vladimir Putin sees no reason to revise relations with Saudi Arabia. He said Thursday that Russia does not have enough information about the unexplained disappearance of a Saudi journalist to justify a review of ties with Riyadh.

Turkey says that Jamal Khashoggi, a columnist from the Washington Post who criticized crown prince Mohammed bin Salman, was assassinated by Saudi agents on October 2. According to Ankara, this happened in the diplomatic mission of Riyadh in Istanbul where his body was cut into pieces. Saudi Arabia denies the allegation.

Putin said on a discussion forum in the seaside resort of Sochi on the Black Sea that Moscow does not really know what happened in this case, that it is a shame that the journalist is missing and that Russia will wait for more details.