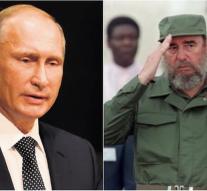 Instead of Putin's parliamentary speaker Vyacheslav Volodin leads the Russian delegation to the funeral of Castro, who died Friday at the age of ninety.