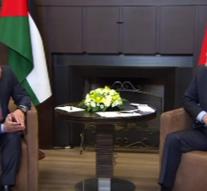 - Russian President Vladimir Putin this afternoon, after meeting with Jordan's King Abdullah, expressed views on Tuesday Russian warplane downed by Turkey. He calls bringing down " a stab in the back " and reports that the event will have serious consequences for the Turkish- Russian relationship.

" Whatever happens, that plane was ours anyway no threat to Turkey ", said Putin.