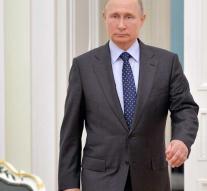 moscow - Russian President Vladimir Putin has invited North Korean leader Kim Jong-un to visit Russia. According to him, this could take place during an economic forum in September, according to news agency TASS.

'I want to invite the leader of North Korea, Comrade Kim Jong-un, to visit Russia,' Putin said during a meeting with the North Korean top official Kim Yong-nam. 'That could happen within the framework of the Eastern Economic Forum in Vladivostok in September. But it can also be arranged separately, 'said the Russian leader.