Home / World / Putin: I have barely spoken to Flynn 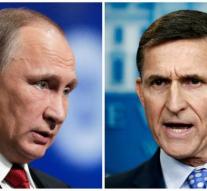 moscow - Russian President Vladimir Putin has said that he hardly spoke to the fired American national security advisor Michael Flynn when they had dinner together in Moscow in 2015. The meeting had little to cope with, said Putin on Sunday against the American news channel NBC.

'I held my speech. Then we discussed some other things. I got up and left. Afterwards, I was told that there was a US lord who used to be at the security services, 'said Putin. 'That was it. I did not even speak him really. So far, my fame goes with Mr. Flynn. '

The dinner where Putin and Flynn were present was in honor of the Russian television network Russia Today (RT). US government officials regard RT as a propaganda channel from the Russian government that disseminates information about the United States.

Flynns ties with Moscow are under a magnifying glass in Washington, after allegations that Moscow may have influenced the US presidential election. Flynn has refused to explain to the US Senate about his ties with Russia. He relies on his constitutional right not to impose declarations that are self-explanatory.

President Donald Trump dismissed Flynn in January because he had misled vice president Mike Pence about his contacts with the Russian ambassador to Washington.