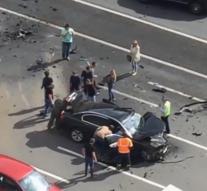 moscow - The Russian President Vladimir Putin driver was Tuesday killed in a car accident in Moscow. The driver of the Presidential BMW collided head on with another motorist.

The victim had more than forty years' experience and was, according to Russian media the favorite driver of the president.

Of the collision are shocking images surfaced.