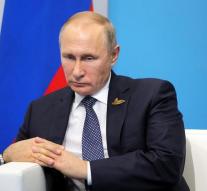 hamburg - US President Donald Trump addressed his Russian ambassador Vladimir Putin on the alleged Russian interference in the US presidential elections. 'They had a very strong and long discussion about that subject,' said US Secretary Rex Tillerson (Foreign Affairs) on Friday.

Trump would have started several discussions about the sensitive subject on Friday during his conversation with Putin on the G20. 'President Putin denied such involvement, as he said in the past,' said Tillerson.

Read also: US and Russia make agreements about Syria

The Kremlin has always denied that hackers had used to politically damage Democratic presidential candidate Hillary Clinton last year. US intelligence services suspect that the Russian government has indeed tried to influence the outcome of the presidential elections.

Also read: Trump: It's an honor to meet Putin