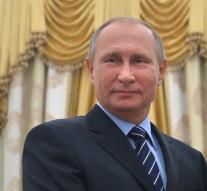 moscow - Russian President Putin has Donald Trump Wednesday congratulated on his victory in the US presidential election.

In a telegram saying the Russian head of state hoped to work with Trump on the relationship between the countries, according to the Russian news agency RIA.

' The dialogue between Moscow and Washington should be in the interest of both countries, '' said Putin.