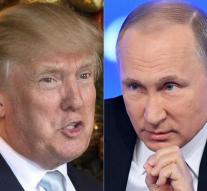 moscow - The new US president Donald Trump and his Russian counterpart Vladimir Putin to call each other according to Russian media Saturday. It would be their first presidential phone call. Trump (70) which is now a week president would pursue much better relations with Russia.

The 64-year-old Putin ruled Russia since the beginning of this century. He has been with the exception of the years 2008 to 2012 President of the Russian Federation.