Home / World / Putin and Khamenei agreed on harmful role US 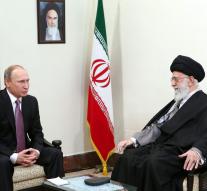 tehran - Russian President Vladimir Putin and his Iranian host Khamenei were Monday in Tehran agree on the pernicious role played by the United States on the issue of Syria. The Supreme Leader of Iran described the role as " a long-term plot aiming to dominate Syria ". Putin was the first time since 2007 in Iran.

Russia and Iran both support the Syrian leader Bashar al-Assad, while the Americans as well as Turkey and the Gulf Arab states want to get rid of the president. They regard him as an obstacle on the road to peace in the civil war-torn Syria. During consultations in Vienna more than a week ago by the world powers and countries in the region decided that the road should be a political one. To begin with, there must be elections within two years.

Putin and Khamenei spoke to each other on the sidelines of a meeting of gas exporting countries in the Iranian capital. Iranian President Rohani said on Monday that the two countries will enter into closer relations. Putin made ​​mention of trade agreements in the fields of energy, banking and transport. Furthermore, Russia will deliver S- 300 missiles to the Iraqi regime.