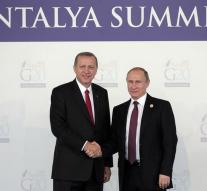 - Russian President Vladimir Putin received Tuesday in St. Petersburg his Turkish counterpart Recep Tayyip Erdogan. The meeting should draw a line under the incident with the Turkish warplane downed Russian, in November last year. Russia responded with a series of economic sanctions, which include hard-hit tourism in Turkey.

In early July, Erdogan apologized, when Russia lifted the ban on charter flights to Turkey.

The two leaders both have an interest in restoring relations. Russia wants to transport gas via Turkey to southern Europe, thus avoiding Ukraine. Erdogan wants to help Russia to prevent Kurds in northern Syria to start their own country.