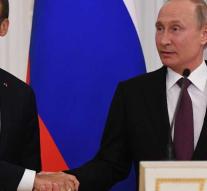 st.petersburg - Russian President Vladimir Putin promised Thursday Thursday at the insistence of his French colleague Emmanuel Macron that Moscow will analyze the Dutch findings about the collapse of flight MH17. Because of the drama, all 298 passengers on Malaysia Airlines' aircraft lost their lives in eastern Ukraine in 2014.

The Dutch investigation team identified a Russian military unit earlier in the day that could be held responsible for shooting the aircraft with a rocket. The Kremlin denies that a weapon system crossed the border with Ukraine.