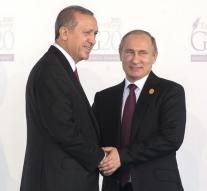 moscow - Russia and Turkey are back on speaking terms. President Vladimir Putin on Wednesday in a telephone conversation with his Turkish counterpart Recep Tayyip Erdogan agreed to resume cooperation. According to the Kremlin, both leaders are again prepared to face meeting.

Putin said that the letter Erdogan sent him this week to offer excuses for shooting down a Russian fighter has created the conditions,, close this chapter of crisis in mutual relations. '

Putin will give his government job to resume consultations with Turkey on reciprocal trade relationship. The restrictions for the Russian tourism raised towards Turkey.