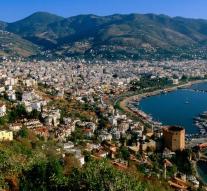 utrecht - The city of Utrecht has completed 43 welfare last year and four 'modified' after research showed that there was fraud.

The immigrants in question were found to have property abroad. The fraudsters received no fines. 'Our own experience with recovery in other countries show that high costs are disproportionate to the revenue that has produced it,' said researchers at the project power abroad.

VVD Councillor Judith Tielen of the VVD find this unpalatable: 'We want to know why no money is recovered or fines are handed out. This seems like double standards. The capacity in the Netherlands is also strictly controlled, so that should also released abroad. '


The investigation looked at the Regional Centre for Combating fraud risk in 2014 and 2015. These are people whose birthplace is located outside the Netherlands and who have been longer than the permitted period of 28 days on holiday abroad since 2010.

The risk existed in Utrecht from 700 beneficiaries, which was considered the risk of assets abroad high. When 102 people were brought an additional research, which eventually 43 benefits were terminated and four modified.

Utrecht has 3.1 percent of the population on welfare, or 10 220 people. Assets included which may not be about the value of a home than 49. 900 euros. To the accounts should not be more than 11 840 euro with a family on welfare.


It is striking that the International Bureau Fraud Information (IBF) indicates that research in Morocco has been very difficult, because a lot of time-consuming research is needed. Therefore, the number of clients in a sample revised downwards. 'However, they are not expressly excluded from the subject of investigation,' it says in the report.

Earlier research by the government found that a quarter of Turks with a distribution capacity abroad. What nationality were the people from the Utrecht study, would not disclose the municipality.

The VVD wants is to maintain the church stricter and more systematic research into power in the Netherlands and abroad. 'Fraud is not to able to pay, and it now looks like it does. '