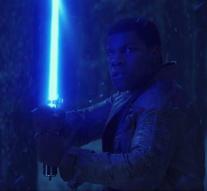 - Star Wars is everywhere this week thanks to the unstoppable marketing machine of the film society. Also on Facebook, you can not ignore the film. Especially if you have a lot of Star Wars fans among your friends.

To be completely in the mood to get fans to their profile picture this week features a lightsaber. They can choose between 'totally-evil ' Luke's red and blue. The lightsaber is as a filter on the photo and is thus placed in a fixed place.Since September, Facebook makes it possible to temporarily change profile photos. So far it is mainly used en masse to show their support for example when the attacks in Paris and gay marriage in the United States.
NEW