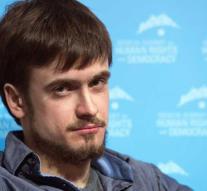 berlin - Pussy Riot activist Pjotr ​​Verzilov is fired from a hospital in Berlin. He was treated there to poisoning symptoms, but his health has improved considerably. The activist has stated in the newspaper Bild the suspicion that the Russian secret service has poisoned him.

Verzilov started losing his sight and speaking power earlier this month. He ended up with poisoning symptoms in a hospital in Moscow. The activist then flew to Berlin to continue his medical treatment there.

The doctors of Verzilov made it clear before to find it plausible that there was poisoning. Otherwise the symptoms could not have developed in such a short time. Moreover, toxicological research has not shown which drug would be used against the activist.

Verzilov is a well-known Kremlin critic. He drew attention around the world by running into the field at the World Cup finals to protest President Vladimir Putin's policy. According to his girlfriend, the activist wants to return to Russia.