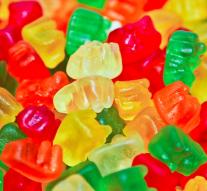 - A group of students became ill after eating so-called 'gummy bears'. Fourteen young people from Naperville School in Chicago even end up in the hospital.

The brightly colored sweets would, according to the American youth 'contaminated' with a marijuana-like liquid. At least 12 of them had eaten sweets.

They complained about increased heart rate, dizziness and dry mouth. By now, most students have left the hospital, two patients have to stay here for observation. Police are investigating what exactly was wrong with the candy.