Home / World / Punishment for US air strike in Kunduz hospital 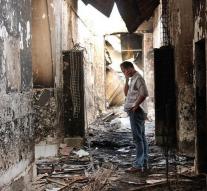 - Sixteen US soldiers have been disciplinary punished because of a bloody raid by the US Air Force at a hospital of Doctors Without Borders (MSF) in Afghanistan in early October. According to US officials Friday will be announced during the presentation of the results of an investigation into the incident.

By the attack on 3 October at the hospital in Kunduz came according to MSF least 42 people dead. The US military later explained on the basis of an initial examination that it was a tragic mistake.