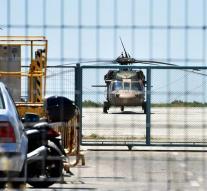 athens - The eight Turkish soldiers who fled after the failed coup attempt in Turkey in a helicopter to Greece on Thursday by a Greek court sentenced to two months' imprisonment. They got the penalty because they were traveling in Greece illegally. The eight have requested political asylum, on which a decision must be made.

The soldiers landed Saturday in the Greek port of Alexandroupolis. The six officers and two NCOs. The military began Friday night. In the course of Saturday, it was clear that the coup had failed.