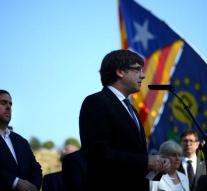 barcelona - One day before the end of the ultimatum made by Spanish Prime Minister Mariano Rajoy, Catalan leader Carles Puigdemont did not look into the map. Monday before 10:00, he must say whether he or she has declared the independence of Catalonia. During a meeting in Barcelona Puigdemont said no 'yes' and no 'no' but only that it is 'tough but hopeful hours'.

Puigdemont put flowers on the tomb of the separatist Lluis Companys, which was justified 77 years ago by the General Franco regime at Montjuïc Castle. The Catalan government leader, who was particularly confused on Tuesday during his independence speech, repeatedly condemned violence again. 'I confirm our commitment to peacefulness, citizenship and self-control, but also to determination and democracy. '

Spanish Interior Minister Juan Ignacio Zoido warned again that Madrid is not pleased with evasive or unclear answers. Only a clear yes or no is allowed.