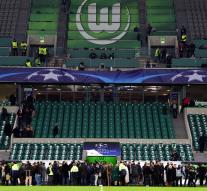 wolfsburg - After the discovery of a suspicious object in Germany after the football match of VfL Wolfsburg against Manchester United in the Champions League may transfer part of the public not to leave the stadium. What has been found, is not clear.

On display was a statement that the football arena should not be abandoned for safety reasons. That was true for the main stand and the south stand. People in the north are allowed to stand outside. The public was called upon to keep calm and to follow instructions. Outside the stadium parking lots were not accessible.