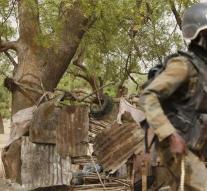 douala - Two pubs have been killed and destroyed in northern Cameroon by blowing up at a shelter for displaced civilians. The two slammed nine others into death.

According to local authorities, the two were between 10 and 15 years old. They traveled as refugees from Nigeria to the place Kolofata where they attacked. Thirty were injured.

In the shelter camp, people who had to leave Boko Haram had to leave a house and a fire because of terrorism.